A genuine golf practitioner, Jack Grout made up his mind early-on to learn not only the intricacies of swing technique, but also why a certain type of swing action seemed to work better than another. His PGA Tour-playing days – where he competed and conversed with almost two dozen future members of the World Golf Hall of Fame – plus, the countless hours he spent in the company of other great teachers like Jack Burke Sr., Alex Morrison and Henry Picard, convinced him that good fundamentals allow you to better coordinate the movement of the body with the movement of the club.

“The only way to play consistently good golf is through the mastery of a set of basics that the great players of the past have proven to be integral to the swing.” Jack Grout

Nevertheless, by 1950, Dad was having second thoughts, or better yet, his own thoughts, regarding certain aspects of his golf mentors’ teaching approaches. Unlike his fellow teachers, my father believed that a novice golfer should learn to swing hard initially and then acquire accuracy later. He was sure that a golfer who gets too accuracy-conscious at the outset will rarely be able to hit the ball hard later on.

This unique philosophy literally played right into the hands of young Jack Nicklaus. Once “Jackie boy” gripped a golf club, it was pure joy for my father to watch his star student wind up like a giant spring on the backswing, then swing the club down and hit the ball as hard and as far as possible.

“If I outdrive you 50 yards I’m going to beat you, or at least discourage you.” Jack Grout

A long hit requires a big swing. A big swing consists of maximum body coiling and arm extension. These movements produce a high, full arc. A full arc is most easily achieved with an upright swing. The fuller the arc, the higher a golfer will fly the ball. Dad regarded height with the long, less lofted clubs as the second most important weapon, after distance, in a golfer’s arsenal.

Developing as full an arc as possible during the golf swing is the most difficult and the most significant fundamental to achieve. Producing the widest possible arc is hard because it requires a substantial amount of stretching and extending. The pressure and actual muscular work involved, isn’t what most golfers are willing to experience.

“When I was younger, one of my key backswing thoughts was to extend my arms and turn my shoulders until it almost hurt. I learned to extend and turn until starting the downswing became an involuntary reflex. That set the stage for a very wide and powerful swing.” Jack Nicklaus

Achieving the widest possible arc is important because it increases leverage which, in turn, generates a high degree of club head speed and velocity. Swinging the club with speed creates distance and the fact, is, the golfer who can hit the ball the farthest has a distinct advantage. 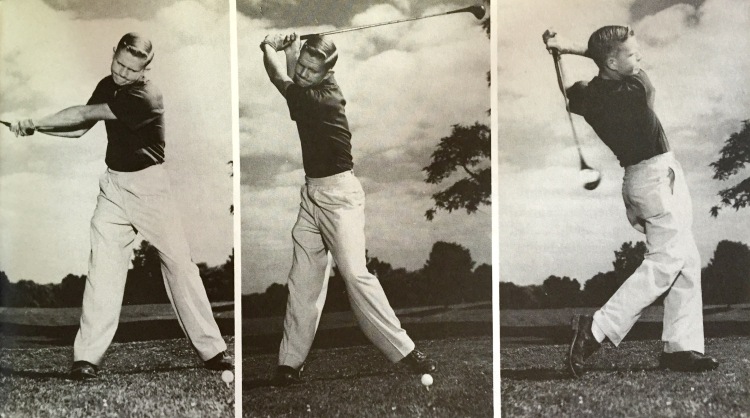 Photos showing 13-year-old Jack Nicklaus swinging-for-the-fences. Dad said, “he was a little kid who just wanted to fire that sucker. He had the instinct.”