“My teaching has always been based on what I believe to be the time-proved fundamentals of the golf swing, even when such an approach has been unfashionable – as has been the case many times in my career.” Jack Grout

Being familiar with Jack Nicklaus since the age of ten, my father was well aware of his strength, flexibility and proclivity for bashing a golf ball. With this in mind, Dad prescribed a seemingly radical move for his protégé. He encouraged Jack to allow his right arm to move away from his right side and to not let his right elbow fold early during the backswing.

“Your right elbow must move away from your side on the backswing if you are going to achieve full power.” Jack Grout

Besides producing additional leverage and speed in the swing, Dad knew that this move helped a golfer to keep the clubface square for a longer time through impact. As a result, Jack was able to play the ball up in his stance without worrying about the clubface turning over and producing a hook. And, the more forward you play the ball in your stance, the higher you’re going to hit it.

My father believed passionately in the high-flying, soft-landing fade as the ultimate scoring shot. This was especially so for an aggressive swinger and long hitter like Jack Nicklaus. During their days together at Scioto Country Club, where the rough was often long and lush, it was inevitable that young Nicklaus would spend a good deal of time in it. Thus, it was highly advantageous for Dad’s star pupil to have a wide, powerful and upright swing that would enable him to bulldoze the ball from tall, wet grass.

From my father’s perspective, this type of swing action was the perfect recipe for holding the firm, fast greens typical of U.S. Open venues and Augusta National. And, regarding the less-supportive observations being made about Jack’s so-called “flying right elbow,” my father’s response was, “Oh yes, I heard some of the criticism. But, I didn’t try to change it. That’s the way I think you should play.” Basically, by refusing to listen to the leading analysts of the day, Dad helped Nicklaus forge a swing that was born to win majors!

Eventually, though, father-time catches up with all of us. Nicklaus would reach his fortieth birthday in 1980, the age when most professional golfers begin to see their games deteriorating as they lose their youthful flexibility, strength and focus. As it related to his golf swing, Nicklaus heard his old coach say: “You have let yourself get way too upright. You are high, which is good. But, you have lost your depth, which is very bad. If you don’t do something about that, your career will be a lot shorter than either of us would like it to be.”

Golf’s greatest champion had gotten himself into a top-of-backswing position that remained steep, but had gotten less and less deep. In any case, Nicklaus found it nearly impossible to draw the ball from right-to-left. And, if the ball did go left, it resembled more of a pull-hook. He was swinging down at too steep an angle, and when that’s done a golfer can’t transfer 100 percent of their power to the ball.

Working intensively with Dad on a much needed and long overdue swing change, Jack got his hands into a deeper (more inside) position on the backswing by turning his shoulders more and tilting them less and by swinging his arms on a shallower plane. This allowed him to deliver the club from inside the target line. When you swing down from the inside, it’s nearly impossible to release too soon.

Conversely, it’s almost impossible to release the club fully if it’s cutting across the target line, from out to in. That causes you to instinctively hold back your arms and hands to keep your shots from going left — a blocking type of release that usually results in a weak pull-slice. A full release of the club results when your right arm crosses over your left through impact with the clubface turning down. A deeper backswing allows you to swing the club more around. It’s an adjustment that can be made to better control your golf shots.

Most players are taught to fold the right elbow early in the backswing (in the style or manner of Ben Hogan). Certainly this is a reliable way to get the club to the top. But it often results in an “open” clubface position caused by a slight concave kink in the left wrist. And, for amateurs beset by accuracy issues, folding the right elbow can exacerbate their slice.

Swinging on an upright plane or in a flatter plane is mostly a matter of personal preference. Both positions work well and often its body type and flexibility that are the determining factors. In the less upright swing, the right elbow doesn’t “leave” the right side, but is kept “close” to the body. Keeping the elbow tucked-in, against the right side, forces the left arm and shoulder around in a flatter plane.

Note: My thanks to World Golf Hall of Fame member Johnny Miller for some information that was used in this article. 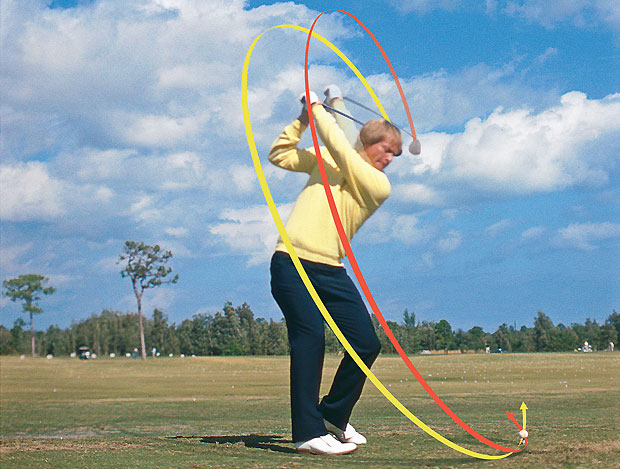