The Tam O’Shanter National Open was held in suburban Niles, Illinois on July 23-26 1942. It was billed as the biggest golfing extravaganza in history – and the most unusual. The tournament was sort of like a circus with side shows for practically everyone. It was the brain-child of wealthy businessman and promoter George S. May. The event hailed itself as having several unprecedented highlights for the expected large galleries. Top ranking black golfers played against their white brethren for the first time in any major tournament.

It was a golfing double-header, another first in the history of the game. The whole affair began earlier in the week with the All-American Amateur tournament and its field of 200 golfers. Then the Tam’s National Open started on Thursday with the 64 lower-scoring amateurs carrying over into the Open competition. The amateurs ended play on Saturday-the Open on Sunday. Next, the size of the starting field and the total prize list were advertised as the largest ever. The combined fields in the two tournaments totaled nearly 500 players. There was a purse of $15,500 in the Open and $1,300 in War Bonds for the winners in the amateur division making it the biggest prize-winning event in the history of American golf.

The week of madness had its fair share of calamity. George May, a flamboyant, shrewd and fast man with a buck, issued each professional a number placard about six inches by four inches and expected it to be pinned to the back of the shirt. He put the numbers on the players to help the gallery identify their favorites much the same way athletes in other sports are denoted. This did not go over too well with the Tour professionals and actually caused a revolt. Many of the pros thought it was undignified and rebelled. May declared he had a “written agreement” with the PGA that all players would wear the numbers, but this was denied by PGA officials. They said it was an “oral agreement” and that the players could wear the numbers if they wished to. 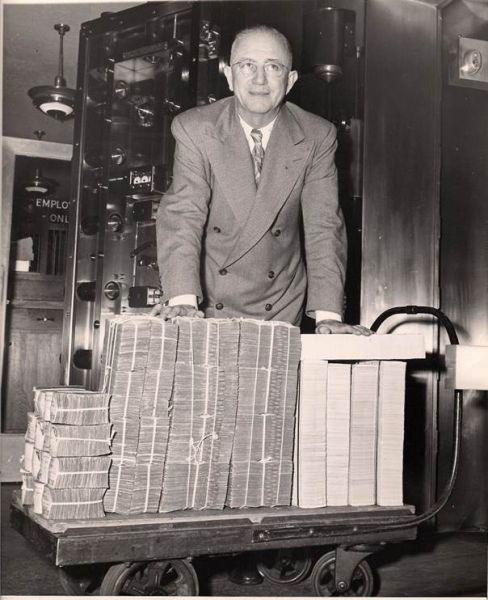 George S. May – Referred to as the King of Promotion showing off tournament prize money.

Angrily declaring that he would not be a “circus horse” for anybody, Joe Kirkwood Sr. refused to wear a number on his back at the start of the third round. In explaining his stand, the veteran trick shot star said: “I’ve been playing tournament golf for 25 years and I don’t propose to start plastering a number on my back at this time. I offered to put the number on my caddie or my golf bag, but under no circumstances on my back. Nothing was said to me in advance about wearing a number.”

The incident grew in proportions when many of the assembled professionals threatened to follow Kirkwood’s example and withdraw from the tournament if the committee insisted on the no numbers, no play rule. A group of leading stars, including Byron Nelson, Paul Runyan, Clayton Heafner, Lawson Little, Dick Metz, Jug McSpaden, Toney Penna and Fred Corcoran, tournament manager for the PGA, held an indignation meeting in the club locker room. Then, they conferred with May in his private office to fight it out. May was adamant and would not back down.

The assemblage of players was unable to make headway with May, who threatened to “call the whole thing off.” May not only refused to permit a player to go off the 1st tee without a number but declined to reinstate Kirkwood. Tommy Armour said he wore his last number as a prisoner of war and in a display of solidarity joined his friend Joe Kirkwood and withdrew from the tournament. “Nobody can tell me what to wear,” said the Silver Scot. “I shall be an interested spectator from here on.”

Apparently, two other pros felt strongly enough about it to withdraw. Joe Coria from Minnesota and George Fazio from Philadelphia told May where he could pin their numbers. None of the fellows particularly liked being “dressed up like a Christmas tree” and when many of them teed off they had their numbers pointedly pinned to the back of their trousers below the belt. Square-shooting Henry Picard did not have his on when he left the first tee, but he later pinned it on. Picard was like most of the fellows who had their priorities in the right order. After all, there was a lot of money to be won and some numbers just meant more than others.