Ky Laffoon was a fascinating, colorful character and one of the most unique individuals ever to play on the pro golf tour of the 1930s and 1940s. When he burst upon the national scene by winning the Nebraska Open in 1933, the press corps was left scrambling to fill their columns with information about this rough-hewn and deeply tanned mystery man. A reporter – it is said to have been a young newspaperman in Boston in 1934 – made an association with Laffoon’s high cheekbones and Oklahoma address, and concluded that Laffoon was Native American. Ky was quoted as saying, “He asked me if I was an Indian and I said ‘hell, yes, full-blooded Cherokee.’” 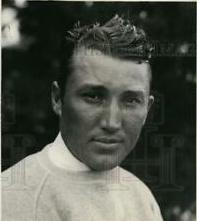 Like other publicity-seekers on the nascent pro tour such as Gene Sarazen and Sam Snead, Laffoon figured if he got a lot of “print” he could get a good job. So, he played along, inventing a Cherokee background and soon became known as “Chief”. The name stuck and for years the press ran endless stories of how remarkable it was to have a Native American in the golf pro ranks. Laffoon even took to wearing a feather war bonnet – a traditional Native American headdress – to keep the ruse going.

A quick check into his background, however, would have revealed that Laffoon was actually born of French, English and Irish ancestry in the town of Zinc, Arkansas. And, as his name suggests, his parents were actually Belgian immigrants. Shortly after his birth on December 23, 1908, the family moved to Oklahoma where young Ky spent much of his formative years, but certainly not on a reservation.

My father and Ky Laffoon first met as teenagers in the fall of 1927 while playing golf in and around Oklahoma City. Over the next twenty years or so, the two pros would share many good times together both on and off the golf course. As a kid, I remember my father telling me stories about his travels with Ky Laffoon. I am pleased to report that many of those fascinating anecdotes are included in my book, “Jack Grout, A Legacy in Golf.” Also, while doing research for the book, I learned from Laffoon’s great grand-nephew, Ronald Ky Laffoon Jr., that the name “Ky” was actually derived from the abbreviation for the state of Kentucky.

I learned from my father that Ky Laffoon was an intense man with quite a raging temper on and sometimes off the course. His golf game was chock full of bulldog courage and side bets. He was a contemporary survivalist who loved to hunt, fish, drink, eat, smoke and chew tobacco, play cards, enjoy his dogs and his friends.

Dad also shared with me that Laffoon fancied himself a ladies man. With his noble nose, sturdy chin, and high cheekbones, Laffoon was a curiously handsome fellow. He had raven-black hair smacked flat with pomade and parted down the middle. When he was getting dressed he’d preen in front of the mirror, slick his hair back and say, “Boy, you’re the best looking man around. I don’t know how the women can stand it!”

In Laffoon’s car besides several pistols, he kept his clubs, shoes and socks, plus bottles of Scotch, chewing tobacco products and cans of sardines. In the trunk there were changes of clothing, a shotgun with boxes of shells, old newspapers, practically everything necessary to take care of whatever scrapes he might get himself into. Laffoon said, “You never know when you’re going to get into a fight with the old lady so you’ve got to be prepared.”

Ky met his “old lady” Irene in 1935 while he worked at Northmoor Country Club in suburban Chicago. Irene was described as an attractive woman, small and blonde. She grew up in the town of Bartlett which is about 30 miles southwest of Chicago. Soon after their wedding, Laffoon became partners with his brother-in-law in a chicken farm that the family operated. That collaboration provided a decent income for Laffoon and his wife who continued traveling together on the tour for many years.

Perhaps as a reaction to his having little or no money as a child and his scruffy years as a caddie, Ky overdressed when he made it on tour. A forerunner to Doug Sanders, and Ian Poulter today, Laffoon was infamous for his colorful outfits, with canary yellow slacks and matching shoes being a particular favorite. He was also known for his explosive outbursts. A botched shot or a flubbed putt might result in a flying or broken club as well as a few tirades aimed at himself, his equipment, sand traps, high grass, the weather and anything else handy.

“I was easily upset,” he said. “The first year I won the long-driving contest in Hot Springs, Arkansas, I probably would have won the tournament, too, but I ran out of clubs. I had all my clubs up in the trees. I got mad and threw one club up in the tree and it didn’t come down. So I threw another up to get it. That stayed. I’m really mad so I throw another. Laffoon added, “Now I’ve got three clubs up that damn tree, and I don’t have over three clubs left. How you gonna win a tournament with just three clubs? I finally got a little kid to go back out there, climb the tree and get them down. It rained and those hickory shafts all had warped.”

As might be expected with such a larger-than-life character, Laffoon could be charming and funny. He could keep groups of golfers captivated and laughing with his stories of the early day tour and many would seek him out for swing tips and to revel in his company.

Sadly, in 1982 Ky was diagnosed with inoperable stomach cancer. And, on March 17, 1984 when his strong and proud body no longer was his, he made a final visit to the armory in his car truck. He was later found dead in his home having shot himself.

In all, Laffoon won 10 PGA Tour titles; five of those came in a magical 12-month stretch from 1933-1934 and, he had 8 top-10 finishes in golf’s major championships. He also represented the U.S. on the 1935 Ryder Cup team. While his tale is truly one of unfulfilled potential and ultimately tragedy, it is also that of a unique character and a hugely popular man who brought fun and humor into a game that can at times be all too serious.